The Development of the Literature in Lithuania Before Skaryna / Rima Cicėnienė

The origins of literature in Lithuania are associated with its first king, Mindaugas (*circa 1238–†1263) and with the lands he ruled. In the 13th century, they were populated not only by the Lithuanians, but also by the Ruthenians and the Germans, with the Jews, the Tatars and the Karaites being later arrivals. The state was not uniform in religious tradition, as both the Latin and the Orthodox rites of Christianity were becoming adopted among the population.

In the mid-13th century, Mindaugas with his court adopted Christianity. This created favourable conditions for the activities of the Catholic Church and for the development of written culture. The extant charters issued by the rulers, correspondence, and donation letters suggest the early written culture in Lithuania to have been Latin. The first translations into Lithuanian, from German, of such prayers as The Sign of the Cross and Our Father also probably date back to the time of the baptism of Mindaugas.

Meanwhile, the first literary works in the GDL were being created in the Orthodox environment of Mindaugas‘ son, Grand Duke Vaišelga (Vaišvilkas, *1223–†1269). In 1257, he founded, in Lavrashev at Nemunas (the present Navahrudak district, Belarus), what likely was the earliest monastery in the GDL. It is probably here that a translation of the chronicle of Greece, Rome and Byzantium (the so-called Chronographia) by the Byzantine historian John Malalas (*apie 491–†578) was written about 1262. This work survives to our days in 15th-17th-century transcripts.

Starting the mid-14th century, the use of written documents became more common in the life of the state, while practical and liturgical texts were being written in several principal languages: Latin, Ancient Greek, German, Church Slavonic and Ruthenian. Lithuanian rulers Vytenis (*circa 1295–†1316), Gediminas (*circa 1275–†1341) and Algirdas (*circa 1296–†1377) built new churches, in Navahrudak, Vilnius, and Trakai, that would become new centres of the dissemination of written culture. About 1316, a separate metropolis for the Orthodox subordinates was secured in Constantinople; its centre was to be Navahrudak, a city ruled by Gediminas’ son Karijotas (or Mykolas Gediminaitis, *after 1300–†circa 1362). On his initiative, the Book of Gospels was compiled in Lavrashev about 1329. This is the earliest extant manuscript book in the GDL written in Church Slavonic in the Mount Athos tradition.

Following the Catholic christening of the state in 1387 and 1413–1417, the rulers of Lithuania started working towards the evangelization of the land, the formation of government institutions (the court and the chancellery), and the establishment of an educational system. The first passional, The Golden Legend or Readings on the Saints by Jacobus de Voragine (*1228–†1298), was given to the newly-founded Vilnius Cathedral by the royal couple of Poland, Jogaila (*circa 1351–†1434) and Jadwiga (*1374–†1399). Later, Grand Duke Vytautas (* circa 1350–†1430), gave the Book of Psalms to Bishop Matthias (ruled in 1422–1453). Afterwards, secular books appeared in the country in ever-increasing numbers: writings by classical authors; medieval works in didactics, philosophy, historiography, geography, cosmography and law; belles-lettres and encyclopaedias. Such books could be commonly found both in monasteries and private libraries.

Early literary texts in Church Slavonic, dated from the turn of the 14th–15th century and extant in manuscript GDL codices, are also associated with the Orthodox tradition. In 1375, the post of Metropolitan of Kiev, Lithuania and Russia was taken by Cyprian (*circa 1330–†1406). The latter is remembered for his enthusiasm for the renewal and distribution of ecclesiastical literature, as well as for his efforts to give specific traits to the Orthodox Church of Poland and of the Grand Duchy of Lithuania. The Metropolitan was a man of letters himself: he translated to Church Slavonic some texts by Patriarch Philotheus of Constantinople (ruled in 1353–1354 and 1364–1376), rewrote the account of the life of Metropolitan Peter of Kiev, and wrote sermons and other texts.

The city of Smolensk, which in 1395–1514 belonged to the GDL, was renowned for its exceptional literacy. Its eight monasteries were well served by the expertise of bishops, hegumens, priests and monks who had excellent grasp on matters of writing and copying. It is here that a prototype of Praise to Vytautas was written and copied into a codex in 1428. The Chronicle of the Grand Dukes of Lithuania is believed to have been written in Smolensk in the environment of Bishop Gerasim (†1435) also around this time (circa 1428–1430). The first part of the Short Redaction gives account of Slavic history from the beginnings of Kievan Rus; the second one tells the history of the Grand Dukes of Lithuania from Gediminas to 1446. Both these parts are united by the aspiration to justify the claim of Vytautas to the rule and the crown of the GDL, and to bring to light the past of Kievan Rus as part of the state. The compendium was written using two different narrative styles, those of Slavic and Western chronicles.

The complexity of the political and religious situation prompted Jogaila and Vytautas to take part in the negotiations for the union of the Greek and the Latin Churches. The idea of the union was proposed at the Council of Constance (1414–1418) by Metropolitan Gregory Camblak (*circa 1364–†1419 or 1420) and supported by Samogitian nobles participating at the Council. Metropolitan Isidore (*between 1380 and 1390–†1463) signed the union agreement, and his speech at the Council of Basel was included into the collection of the council‘s documents.

The Catholics, from their side, were also seeking the unification with the Orthodoxes. To that purpose, Casimir Jagiellon (*1427–†1492) invited the Bernardine brothers to come to the Kingdom of Poland (1453) and the Grand Duchy of Lithuania (1468–1469). The members of this order had a good knowledge both of the Orthodox and Catholic literature, which enabled them to disseminate Catholicism and the church union ideas in the Ruthenian lands of the GDL. The monasteries in Vilnius, Polotsk and elsewhere had libraries and scriptoria. Texts written there in the 15th century included translations of fictional literature into Ruthenian: The Life of Alexey, The Agony of Christ, Tales of the Three Kings, The Tale of the Knight Tristan, The Tale of Bova. Collections of Catholic texts (prayers, papal bullae) were compiled on the request of the Orthodoxes interested in Catholic rites. The Bernardine Monastery in Vilnius became a centre of Latin written culture. Some manuscripts, such as Antiphonary and Gradual copied by the monk Ambrosius from Kłodawa (†1494) in 1469–1494, survive to this day. The oldest known Lithuanian texts – glosses and the above-mentioned prayers, dated from approximately 1520–1530 – are also associated with the Bernardines.

Another strong centre of written culture in the GDL emerged in the environment of the ruler‘s palace. In 1492, Alexander Jagiellon moved his court to Vilnius, which became a stimulus for the cultural development of the state. He reorganized the Grand Duke‘s chancery, started putting the state archive into order, and began recruiting educated people (both locals and foreigners) for state government service. Some of the more significant literary pieces were created, notably, in the ruler‘s chancery. The First Statute of Lithuania (confirmed in 1528) and the second redaction of The Lithuanian Chronicle (2nd–3rd decade of the 16th century) were written in the environment of the Vilnius Voivode and Grand Chancellor of Lithuania, Albertas Goštautas (*1480–†before 1539). Stemmata Polonica (also called The Arsenal Armorial), or a copy of The Armorial by the Polish historian Jan Dlugosz (*1415–†1480), was written and illuminated by miniatures for the Bishop of Vilnius, Paulius Alšėniškis (*1490–†1555).

The magnates were determined not to be outdone by the ruler. An Orthodox monastery founded in Suprasl in 1498–1501 became one of the most significant centres of the religious and cultural life of the GDL and a fostering place of manuscript book culture. Its activities were actively supported by the magnate Aleksandras Chodkevičius (*1457–†1549), the ruler Alexander Jagiellon, and especially, Metropolitan Iosif II Soltan (*circa 1450–†1521 or 1522). The latter, an educated and well-travelled man, attempted to regulate church practices in the GDL and made effort to correct and renew Orthodox ecclesiastical writings. He was the driving force behind the creation of new redactions of the Prologue (1512), the Emerald (the early 16th century) and the Nomocanon (a collection of ecclesiastical and secular laws, the late 15th century), as well as a new copy of the Pentateuch (1514). The new redaction of the Prologue included completely new hagiographical texts such as accounts of the lives of an Orthodox saint of the GDL, Euphrosyne of Polotsk (May 23), and of the martyrs Anthony, John, and Eustathios (January 14). Its encyclopaedic quality made it a veritable corpus of the lives of local Orthodox saints. The texts in the new redaction of the Emerald were not only scrupulously selected and copied from different sources, but also grouped by authors, i.e. the content of the book was structured by the monographic principle, a novelty for Eastern Orthodox literature at that time. It is believed that Matthew the Tenth (†1507), a prominent scribe who used similar principles compiling the Compendium of the Books of the Bible (1503–1507) in Vilnius and Suprasl, might have also contributed to the making of this new redaction. According to some scholars, this collection of the books of the Old Testament could have been compiled for the wife of Duke Alexander, Elena (*1476–†1513), an Orthodox who had come to live in the Catholic country. This was a major effort to compile the complete Holy Scripture for the Orthodoxes of the GDL, similar to the Latin Bible used by the Catholics.

At the turn of the 15th–16th century, both the content and design of the manuscript book were in line with the civic attitude of the magnates and the nobles of the GDL, characterized by common intentions and similar actions. The manuscript book came to be a manifestation of this spirit of commonality. This concept of the book appears to have later been adopted by Francysk Skaryna, whose publications reflect not only the Orthodox, but also the Catholic orientation. 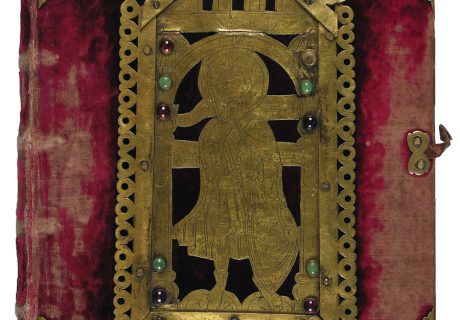