Skaryna and Czechia. The Royal Gardener and His Family / Ilya Lemeshkin

After the death of his elder brother Ivan in 1529, Francysk was stricken by numerous calamities. The brother‘s creditors accused Skaryna of purloining Ivan‘s property, absconding from Vilnius and refusing to pay the debt. Based on their claim, Francysk was arrested on the orders of King Sigismund the Old on 5 II 1532 and put into a Poznań prison in April. The court proceedings lasted until November and ended in the acquittal of Skaryna. Moreover, Sigismund the Old in his letter of 25 XI 1532 bestowed on Skaryna his personal protection and some privileges, like the right to live “in a city and a place of his choice“.

Availing himself of the right granted by the King, Skaryna elected to live in the Czech Kingdom. There is no exact evidence as to what he did in 1533–1534. The first tangible trace of him dates back to 1535. On the turn of May and June of that year, Skaryna came from Vienna to Prague, carrying a letter issued by the Czech King, Ferdinand I, on 22 V 1535, in which Skaryna was appointed to the royal service. The addressee, the superintendent of the royal court in Prague, Florian Gryspek (Florián Gryspek z Gryspachu, *1509–†1588), was obligated to take care of Skaryna, the new royal gardener.

The royal garden was founded in the place, where vineyards owned by townsmen from the Lesser Town of Prague, the canons of the Chapter of the St. Vitas Cathedral and the monastery of St. George, had been growing since the 14th–15th century. On 4 VIII 1534 Gryspek was authorized to buy land plots needed to lay out the garden; on 13 XI 1534 he signed an agreement with Italian builders. Their arrival was preceded by various preparatory works such as cutting the vineyards, merging the plots, levelling the ground and bringing construction materials as well as by designing the project of the garden. The latter job was assigned to Skaryna. At first, he scrupulously examined the territory, i. e. the part of Prague situated in monte dicto Bruska (on the hill called Bruska), and only then drafted the project, which was to be approved by the King. All this must have happened before 1 V 1535, since it was on that day that Ferdinand I sent to Prague two plans of the garden. At the end of the month, the ruler also sent to Prague the author of the project, namely Francysk the royal gardener.

The construction and cultivation of the garden, carried out since the summer of 1535, took a longer time than had been expected. Nevertheless, a few years brought tangible results and the royal garden garnered favourable mentions even in the Czech literature of those times. However, the activities of “Master Francysk“ just at that time began eliciting displeasure. On 27 VI 1538, Gryspek complained to the King that Francysk “was working poorly“ and that “except Italian fruit (lemons, oranges and suchlike) growing here, we could not console Your Majesty with anything singular“. In his answer dated 4 VII 1538, the King commanded to put the gardener under closer supervision, so that he work with greater diligence.

It seems that the superintendent‘s complaint was without real foundation. Before the spring of 1538, Francysk’s effort was focused on forming the slope of Brusnice, fencing the garden and building a bridge. Only after that the intensive cultivation could begin. On 13 II 1538, 430 vine saplings, 30 fig-trees, 12 quinces, two boxes of peach and almond pits, as well as numerous apricot and cherry scions, arrived to Prague from Trieste. Before 21 VII 1538, another shipment of seeds and plants came from Vienna. Saplings would have been coming before that as well, but not in such large quantities at a time. Therefore, Skaryna certainly was not being idle. Besides, results of his work depended not only on his skills and efforts, but also on the quality of the seeds and saplings, and on how these were compatible with the local conditions. Skaryna was the first in the Czech Kingdom to grow citrus plants and to experiment with other subtropical flora, slow to thrive under the Czech sky.

Skaryna remained in the royal service until the summer of 1539. On 21 VII 1539, Ferdinand wrote in his letter to Prague, “First, of Master Francysk, the Italian gardener. We commanded the court palace of Bohemia to pay for his labour by time and settle account with him, and that you keep him no longer. Of everything, we had been informed sufficiently, since after that he arrived to Our court and stayed a while in Neustadt [of Vienna]”. The particular reasons behind the end of Skaryna’s service in Prague (his age, other occupations, displeasure with his work etc.), remain unclear, but it is important that the King and his gardener parted company amicably: they met, Skaryna informed the ruler about something, afterwards stayed in Vienna for a while, and the Prague court paid him in full for the four-year service (22 V 1535–21 VII 1539).

We would like to draw attention to the description of Skaryna in the royal letter. There he is called “Italian gardener“ (welisch gartner). This turn of phrase in not accidental. In Bohemia, Skaryna called himself  Italian as otherwise he would have had difficulties  in the professional field dominated by Italians.  However, presenting himself as Italian, he was far from being deceitful.  In Austria, Bohemia, Italy, Germany and other lands there had already been known about the origin of the Lithuanians from the Romans. Claiming to be “Litalian”, i. e. Italian-Lithuanian, was understandable and acceptable for a citizen of the GDL. The image of a foreigner in those times brought prestige. In Cracow, Skaryna called himself descendant of the Romans, Litphanus. In Padua, he presented himself as Ruthenian, since an Italian could hardly surprise anyone in Italy. However, in the Ruthenian Bible he, understandably, called himself Doctor Francysk Skaryna from Polotsk: these books of the Holy Scripture were meant for the readers in the GDL rather than for the Czechs. Having arrived to Czechia again, he, for status reasons, passed himself as welisch gartner and created there an Italian garden.

The making of the garden throws additional light on the caliber of Skaryna‘s Renaissance personality. As a publisher, writer, translator and scholar, he had many occupations and achievements. His Ruthenian books enriched the cultural space of the GDL. However, in Western Europe his legacy is of a different kind. He is the creator of the Royal Garden of the Prague Castle, the first Renaissance – and the oldest surviving – garden in Czechia, an impressive Italianate monument of nature and architecture.

Besides the Royal Garden, Skaryna, in Prague, tended another “garden“, or his family. He had come to Czechia in the company of his children, born in 1526–1529 from his marriage to a Vilnius townswoman, Margarita (†circa 1530). We know of two their sons, Francysk (František) and Simeon. In 1539 they would have been six to nine years old. Having entered into the royal service, Skaryna started looking for a place, where his son, František, could receive his early education. Eventually, such a position was found at the household of the priest Jan of Puchov (Jan z Púchova, Johannes Podbradský de Puchov, †circa 1557). This must have happened in 1536, when the priest was made canon of the Chapter of the St. Vitus cathedral, moved into the Prague castle and started looking for reliable servants. František served as personal secretary to Jan of Puchov and run for him various errands.

The service to the canon soon came to a tragic end. František died on 2 VI 1541 at the Great Fire of Prague. Vaclav Hajek from Libočany (Václav Hájek z Libočan, †18 III 1553) briefly recounted the tragic event in a pamphlet, On an unhappy accident that took place at the fire in the Lesser Town of Prague, in the Castle of St. Vaclav and Hradčany. The pamphlet came out in Czech on 17 VI 1541; two weeks later, the same publisher printed its German version. In the very same 1541, it came out in Augsburg twice again. The latter editions are important for Skaryna studies, since they contain a wood engraving picturing the fire of Prague. On the left, we can see a bridge that used to connect the Royal Garden with the castle. The gardener‘s cottage (it is not in the engraving) used to be to the left of the bridge. On the other side of the bridge, we can see the Powder Tower (Mihulka or Prašná věž), the very place near which František the Russian died.

The second son had a happier fate. Simeon the Russian (†after 1593) followed in the steps of his father: he was a physician and gardener. His teenage years were clearly spent in the Royal Garden, when he learned horticulture from his father. It remains unknown, though it may be guessed, where he received medical education. The Dean‘s Register of the Faculty of Philosophy of Charles University has a record about a Simeon Novopragensis who received a Bachelor‘s degree in 1545. For the period of 1534–1551, he is the only person who may be Skaryna‘s  son. The toponym indicating his place of origin is important, it means of “the New Town of Prague“. As customary for a Dean‘s Register, such a toponym shows the location of the school in which the young man studied before entering the university. This information is important for Skaryna‘s biography, since it suggests where he and his sons could have lived after 1539 (i. e. after the end of his service to the King) and where he, most probably, died. The exact date of Skaryna‘s death is unknown – it had to have happened before 29 I 1552. After the death of his father, Simeon the Russian applied to Ferdinand I with a request that the King order his subjects in various Czech locations to assist Simeon in recovering his father‘s fairly sizable assets to which he had the right of inheritance. On 29 I 1552 the King granted, in writing, the lawful request of “his gardener‘s“ son.

Afterwards, Simeon‘s steps may be traced towards Southern Czechia: he served as a gardener to the Vitkovič family in Jindřichův Hradec; he had a medical practice in Český Krumlov; at some time he himself had medical treatment in Kaplice. In the seventh decade of the 16th century, he served at the estate of Joachym of Hradec (*1526–†1565). This is worth mentioning, since it is from there that Simeon, in 1563, travelled to Moscow via Vilnius. The purpose of this journey remains unknown, but most probably, it was related to the tragic events of the Livonian war. On 15 II 1563, the Muscovian army took Polotsk. Many residents of the city were driven to exile. Simeon’s relatives from the side of his uncle Ivan could have been among them. Simeon Skaryna reached Moscow and successfully returned to Southern Czechia.

In 1584, Simeon the Russian had to resign from the gardener‘s duty. The date of his death is unknown. In 1593, there is a mention of him as still living. 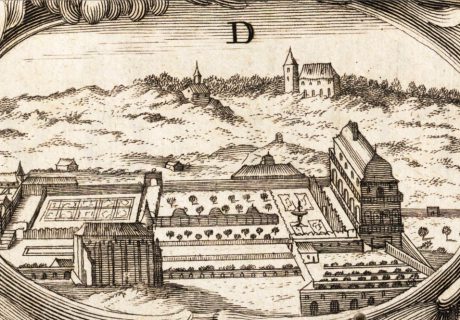