In Lieu of a Preface / Sigitas Narbutas

Five hundred years have passed since Francysk Skaryna started publishing the Ruthenian Bible in Church Slavonic in Prague. In 1522, already in Vilnius, he published the Little Traveller‘s Book, and in 1525, another book, today known as the Apostle. By these works, the Ruthenian from Polotsk not only opened a new, very important page in the Ruthenian literature of the Grand Duchy of Lithuania, not only started the history of the printed word in this state, but also proved that both he himself as a Renaissance man, and his homeland as the multilingual and multinational  Grand Duchy of Lithuania, were more than ready for cultural innovations. Today his publications show us the roads and spaces, by which such innovations reached Skaryna, his environment, and his homeland.

Published in 1517–1519 in Prague, the Ruthenian Bible occupies a place of honour among translations and publications of the Holy Scripture. This is the earliest case of the Old Testament in Church Slavonic being printed with a printing press. Moreover, the Bible had previously been printed in only three vernacular languages: Italian, German and Czech. Since Skaryna wrote prefaces to individual volumes of the Old Testament in Ruthenian, his Ruthenian Bible may be added to that memorable list as number four.

The Ruthenian Bible is valuable  not only in regard to the history of publishing of the Holy Scripture. Its texts even now captivate our interest by the humanistic, ethical and educational aspirations of their publisher.  The Ruthenian Bible is a significant monument of the book art Lithuania, Belarus, Ukraine and Czechia. All this is concisely presented in the stands of this exhibition. 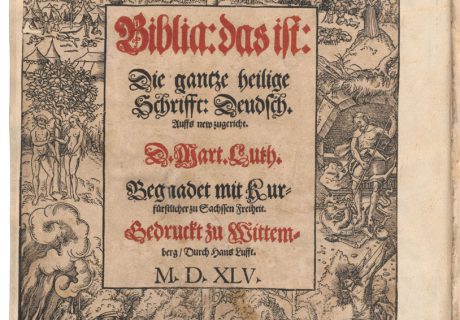