First definitive efforts in paying tribute to Skaryna‘s memory in Lithuania are dated from the first half of the 20th century. In 1925, the 400th anniversary of Ruthenian printing was commemorated throughout the region, including Vilnius. In the same year, such authors as Ludwik Abramowicz (Abramovičius, Abramowicz-Niepokόjczycki, *5 VII 1879–†9 III 1939) and Adam Stankevich (*6 I 1892–†4 XII 1949) published works on Skaryna. Abramowicz devoted to Skaryna the first chapter in his monograph Four Centuries of Printing in Vilnius (Cztery wieki drukarstwa w Wilnie), thus connecting Skaryna‘s name with the origins of print in Vilnius and, shall we add, in the entire of the GDL. Stankevich published a short monograph, Dr. Francysk Skaryna, the First Belarusian Printer 1525–1925 (Доктар Францішак Скарына першы друкар беларускі, 1525–1925), which came out in two editions in the very same year.

Between the wars, the memory of Skaryna was preserved in the names of at least two organizations of Vilnius Belarusians: a student society and a printing house. At that time, Stephen Batory University was home to the Society of the Friends of Belarusian Studies. On 1 II 1935, the Senate approved the statute of another such organization, the Francysk Skaryna Belarusian Academic Society. Judging by its statute, the society was a non-political organization. Its members maintained a commitment to uphold civic virtue and the devotion to the nation and homeland. This was attempted to achieve through various scientific and cultural venues. Apparently, the society ceased to exist after the reorganization of the university to Vilnius University on 15 XII 1939.

A Belarusian printing house named after Francysk Skaryna operated in Vilnius in 1926–1940. It was founded by the already-mentioned Father Adam Stankevich, a prominent Belarusian politician and educator. In 1926–1930, the printing house was located at Liejyklos St. 1; in 1930–1936, at Pylimo St. 6a; afterwards, at Pylimo St. 1. Judging by extant invoices, the establishment produced books, brochures, statutes of various societies, posters, slips, labels etc.

Between the wars Skaryna was commemorated in the Republic of Lithuania mostly through efforts of Belarusian intelligentsia. Among the publications devoted to him, The History of the Belarusian Book (Gudų knygos istorija) by Vaclovas Lastauskas (*8 XI 1883–†23 I 1938) is of special notice. The author accords a particularly large amount of space to Skaryna‘s publications and praises their accessible language and the artistic quality of their printwork.

After World War II, the name of Skaryna was most often commemorated on official occasions. The latter were chronicled in the writings of the historian and long-year director of the Vilnius University Library, Prof. Levas Vladimirovas (*11 III 1912–†20 II 1999). A short work by Vladimirovas, Francysk Skaryna, the Pioneer of Vilnius Printing (Pranciškus Skorina – Vilniaus spaudos pradininkas, 1956) came out to mark the 430th anniversary of the publication of Skaryna‘s books in Vilnius (1955). A supplemented translation of this book into Russian was published in 1975 to mark the 450th anniversary of printing in Vilnius, and in the same year, there appeared proceedings of the international conference organized by Vladimirov in Vilnius university, Francysk Skaryna and Some Issues of Book Development in the Soviet Union (Франциск Скорина и некоторые вопросы развития книги в Советском Союзе, 1979). On the occasion of the 470th anniversary of the Little Traveller‘s Book, another book by the professor, Francysk Skaryna, the First Printer of the Grand Duchy of Lithuania (Pranciškus Skorina: pirmasis Lietuvos Didžiosios Kunigaikštystės spaustuvininkas), came out in 1992.

Following the 450th anniversary of the GDL book, the memory of Skaryna began to be perpetuated not only by means of written text. In 1973, a decorative sculpture in pink granite, “The Chronicler“ by artist Vaclovas Krūtinis, was erected in Vilnius in the Printers‘ Yard (Spaustuvės kiemelis) to pay tribute to Skaryna‘s memory and to commemorate the Mamonich printing shop once located in a nearby house.

Since the restoration of the independence of Lithuania, the memory of Skaryna has also been honoured by other tokens of commemoration. In 1990, a memorial plaque to him was unveiled at Didžioji St. 19/2 (the Old Town Eldership). It features a bas-relief portrait of the printer and an inscription in Lithuanian and Belarusian telling that from 1522 to 1525 Skaryna printed the first books in the GDL in Vilnius. In 2010, a dedication to Skaryna by artist Ugnė Žilytė was put up on the wall at Literatų St. (Old Town eldership) alongside tributes to other prominent Vilnius residents.

The appearance of the character of Skaryna in fictional literature is a testimony to the transformation of his name into a memory place. An essay collection by Emilija Liegutė published in 2001, Francysk Skaryna: the Legacy to Leave after Oneself (Pranciškus Skorina: palikti šlovę ir atminimą savo) was given the Vilnius Club and Vilnius TV literary award in the same year.

Two streets in Lithuania carry the name of Skaryna: one is in Vilnius, the New Town eldership (it was called Dobraja, or Good in the times of the tsars, and afterwards, Dobra until 1940); the other is in Lavoriškiai village (Lavoriškiai eldership, Vilnius district municipality).

The most important tribute to Skaryna‘s memory in Vilnius is a school named in his honour. Its history begins on 15 VI 1994. At that time, the 68th secondary school with education in Belarusian was founded in the capital, at 21 Sietyno St. (Karoliniškiai eldership). On 25 III 1997, the name of Francysk Skaryna was given to the school by a resolution of the Vilnius City Council. On 15 II 2013, by another resolution of the Council, Francysk Skarina Secondary School was reorganized into a gymnasium-type school. The studies are conducted in Belarusian, some subjects are taught in Lithuanian. Since 2 XII 2015 the gymnasium has been headed by a teacher of the Belarusian language, the Director Diana Stachnovich.

On 18 XI 2016, the students of this school participated in the ceremony of laying flowers at the memorial plaque commemorating Skaryna. The celebration was organized by the chairman of the Belarusian club “Siabryna“, Valentin Stekh, with the participation of the Embassy of the Republic of Belarus and the Vilnius city municipality. The next day, Skaryna readings on the topic “Book Tradition in the Grand Duchy of Lithuania“ were held in the Vilnius Writers‘ Club, with presentations given by scholars from Lithuania, Russia and Belarus.

The tributes to Skaryna’s memory in the present independent Lithuania are regretfully few in number. Skaryna is important, first of all, to those who may count themselves among the heirs of the Ruthenian culture in the GDL, namely the Belarusians living in Lithuania. The memory of Skaryna helps them to substantiate their ethnic individuality and cultural identity among other communities in Lithuania. The same could become true for the Ukrainians of Lithuania, the other inheritors of the Ruthenian culture of the GDL. And indeed, Skaryna intended his books to be read by all brother Ruthenians of Lithuania.

Skaryna should be even more important for the Lithuanian part of the society of Lithuania: not only because we are the inheritors of the statehood, culture, religions, and the traditions of science and art of the GDL, but also because Skaryna’s activities mark the beginnings of several significant events and processes on the road to the modernization and Europeanisation of Lithuania. 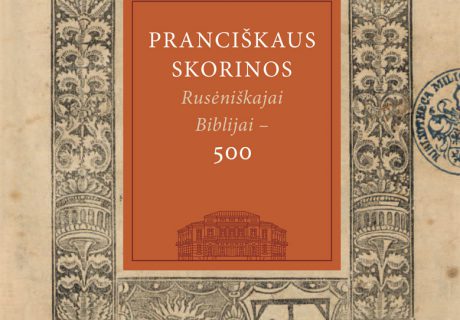 Preserving the memory of Skaryna. Lithuania