Skaryna and Lithuania. The Little Traveller‘s Book and the Acts and Epistles of the Apostles / Sergey Temchin

Francysk Skarina had more connections to the Grand Duchy of Lithuania than to any other country. Here, in Polotsk, he was born; he more than once would mention this glorious city as his homeland in his publications. In Vilnius he must have received his early education; here, he had been living for a long while (from about 1520 to 1536), serving as a personal physician and secretary to the Catholic Bishop of Vilnius, John of the Lithuanian Dukes (*18 I 1499–†18 II 1538); here, he married and raised children, here, he printed some of his books.

Publishing the books prepared for publication by Skaryna was funded by prominent Vilnius townsmen, without whose support these editions would not have seen the light of day. A considerable part of the print run of the six books published in Prague in 1517–1518 was financed by a Vilnius merchant, city councillor and mayor, Bagdonas Onkovas (Богдан Онков). At the house of the senior city mayor of Vilnius, Jokūbas Babičius (Якуб Бабич), Skaryna founded the first printing house in the Grand Duchy of Lithuania and in the whole of Slavic lands.

The language of all the publications by Skaryna reflects the language situation in the GDL, a country with a tradition of the concurrent use of two Slavic written languages: Church Slavonic (used in the Orthodox ecclesiastical books) and Ruthenian (employed in secular texts and as the official written language of the state). The synthesis of these two languages can be seen in Skaryna‘s books: they were published in Church Slavonic with some elements of Ruthenian (the latter are fewer in the Biblical and liturgical texts and more frequent in the prefaces and concluding statements).

The Lithuanian state was home to Skaryna‘s target audience, whom he addressed:  “my Ruthenian brothers“. In those times, this was the name for all the Eastern Slavs (including the Muscovites). Nevertheless, Skaryna, first and foremost, had in mind the Ruthenians of the GDL (the common ancestors of the modern Belarusians and Ukrainians), to whom he himself belonged.  Francysk explained in the preface to his first publication, which it was that prompted him to take on publishing Cyrillic books:  “mostly because that the Merciful God led me from this people into the world“ (Psalms, Prague, 157, fol. 3v). Even though Skaryna himself was a Catholic, his publications were intended for the Orthodoxes. This is suggested by the following facts: the Book of Psalms he published is Orthodox (150 psalms grouped into 20 liturgical chapters, with the addition of Psalm 151); the text of the Creed printed in the Little Traveller‘s Book does not have the words filioque (and Son), which are important for the Catholics; and the ecclesiastical calendar celebrates Orthodox rather than Catholic saints; the genre of akathist, likewise, is associated more with Orthodox traditions.

In Vilnius, Skaryna published two books: the Little Traveller‘s Book (Малая подорожная книжка, circa 1522) and the Acts and Epistles of the Apostles (the Apostle, 1525). Their combined length is twice smaller than that of his earlier Prague publications. The print of Vilnius publications is often in two colours: the main text is printed in black, the commentaries, in red (in Prague, only the Song of Songs was published in this manner); the artistic design is more modest (far fewer engravings), the book format and the font size is smaller (the old font of the Prague publications here is used only in headings).

The Little Traveller‘s Book consists of Psalms, the Book of Hours (Часослов) and liturgical chants: eight akathists (liturgical hymns chanted standing – sitting not being allowed), eight canons, Hexaemeron (Шестоднев), the Canon of Repentance (Канон покаяльный) and the Daily Cycle of Services (Последование церковного собрания). 22 parts of this books are considered to be separate publications, designed by their publisher to form a whole, which he, in his concluding statement for all the parts together, called the Little Traveller‘s Book. The year of its publication may be determined based on the included Computus that contains extensive astronomical information and indicates all the dates of Easter starting 1523 (which means that the book was published in 1522). The publication place – the most glorious city of Vilnius  – is given at the end of the concluding address of the Horologion.

The Little Traveller‘s Book also has another distinct trait of the ecclesiastical Slavic literature of the GDL, a widespread use of new akathists in the 16th–18th century, when in Muscovy they still were of little interest. The best known piece in this genre is the Greek akathist to the Mother of God, also called the Great Akathist, or just Akathist. This universally acclaimed masterpiece of Byzantine literature was written by an unknown author in the 5th–early 6th century and hypothetically attributed to St. Roman the Melodist (†circa 556) or to other authors. Since the mid-14th century, other Greek hymns of a similar structure have been created to honour the Allmighty, the Mother of God, or saints, the word “akathist” now meaning a genre rather than the name of an individual piece. A weekly cycle of Greek akathists (an akathist for each day of the week) written at that time made the basis for the Book of Akathists.The Slavic Book of Akathists for the first time was published in the Little Traveller‘s Book by Skaryna. The latter contains eight akathists in Church Slavonic (with Ruthenian elements), of which seven constitute a weekly cycle, an akathist for each day of the week, except Thursday (for which there are two texts: the Akathist to St. Apostles Peter and Paul and the Akathist to St. Nicholas the Wonderworker) and Saturday (for which there is no Akathist); the additional eighth Akathist to the Sweetest Name of Jesus is intended to be sung every day of the week.Two of these akathists were written by Skaryna himself: the first letters of their stanzas make Slavic acrostics (phrases formed by the first letters of the lines of a poem), which spell out the Latin form of the author‘s name: “Written by Doctor Skorinich Franciskus“ (Akathist to St. John the Baptist written for Tuesday) and  “Made by Doctor Skorinich Franciskus“ (Akathist to the Sweetest Name of Jesus).

The second Vilnius publication, the Acts and Epistles of the Apostles, presents a traditional liturgical text in Church Slavonic with prefaces written by the publisher himself in order to facilitate the understanding of the Holy Scripture. The date and the place of publication are clearly stated in the book. The text of the Bible (slightly revised based on the Bohemian Bible published in Venice in 1506) is printed in black, while additional rubrics (the book title on the title page; the beginning and the end of liturgical sections in the text, days of the week on the margins; instructions as to the reading order of some sections) are printed in red.

In the main text, the red colour is used only in part of the print run: in most extant copies, additional information is printed in black, similar to the text of the Bible. There remains only one copy containing an explanation of the use of red colour. Here Skaryna also writes that he has translated all the books of the Bible, both the Old and the New Testament (although far from all of them are known to us).

Skaryna‘s publications printed in Vilnius were intended for the education of wide circles of society; books like his Psalter, Horologion, and the Acts and Epistles of the Apostles were traditionally used by the Orthodoxes for teaching primary writing skills and in the formation of literacy (Cyrillic alphabet books appeared only later).

We know of 17 complete or partial manuscript copies of the Little Traveller‘s Book and 11 copies of the Acts and Epistles of the Apostles (1568–1890). Most such manuscripts functioned on the territory of the Ruthenian lands of the GDL and the Polish Kingdom, some were written in Muscovy or Serbia. 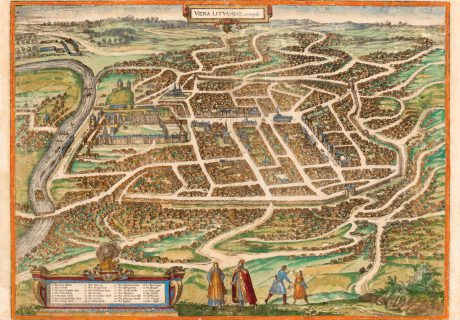