An Overview of the Biography of Skaryna / Sergey Temchin

Francysk Skaryna (Pranciškus Skorina, Франциск Скорина, Францыск Скарына, *before 1490 in Polotsk–†before 29 I 1552 in Prague) was the first book publisher in the GDL (and in the Eastern Slavic lands in general), a translator, writer, liturgical poet, humanist and scientist (botanist and physician).

Due to a lack of reliable sources, our knowledge of the biography of Skaryna is perfunctory. Not a single document, which would have thrown light on his publishing or literary activities, survives to these days.

He was born in Polotsk into a family of an Orthodox fur and leather merchant, Luka Skaryna (Lukas Skorina, Лука, Лукиан Скорина, the first mention of him dates from 1492). An important centre of international trade, Polotsk was granted the Magdeburg rights in 1498. Later Skaryna would more than once mention it in his publications as a glorious city and his birthplace. Francysk had a much elder brother, Ivan (Иван Скорина), who, like his father, was a tradesman. In documents dated from 1518, Ivan is mentioned as a resident of Polotsk, in those from 1520, of Vilnius. Upon the death of Luka Skaryna (before 1512), his business and property was inherited by the eldest son, Ivan. The youngest, Francysk, did not possess any property.

The youngest Skaryna‘s interest in Catholic culture must have been awakened by the Bernardines, whose monastery was founded in Polotsk in 1498. However, it must have been in Vilnius that he learned Latin and acquired primary education. Francysk might have received his name having converted from Orthodoxy to Catholicism, in honour of the patron of the Bernardines (and the Franciscans), St. Francis of Assisi.  In this Francysk would have stood apart from the other members of his family who had traditional Orthodox names.  If this is true, Skaryna‘s initial baptism name remains unknown (the sometimes-mentioned “George“ is the fruit of a misunderstanding).

However, Skaryna‘s editions show that he was versed in Church Slavonic, the language traditionally used in Orthodox liturgical and, in general, ecclesiastical writings. Church Slavonic was used on the territory of all Orthodox Slavic (Bulgarian, Serbian, Old Russian), as well as Romanian and Moldavian, lands. In addition, Skaryna knew Cyrillic script and Ruthenian, the official language of the GDL; he was also knowledgeable about Orthodox liturgical writings and later composed them himself.

Therefore, Francysk would have received a dual linguistic and cultural education: first, he must have tackled traditional Orthodox studies (probably, in the family), and later, studied in Catholic educational institutions. The education of this kind was usual for the young Ruthenians who lived in the GDL or the Kingdom of Poland. Once in a while, they would convert from the Orthodoxy to Catholicism. Skaryna‘s Catholic convictions together with his knowledge of the Orthodox tradition is shown by the fact that he himself created two original akathists in Church Slavonic, and wrote his own name in the Latin form into their Ruthenian acrostics (printed in Vilnius about 1522).

In 1504–1506, Skaryna studied in the Cracow University (the capital of the Kingdom of Poland), where he received a Bachelor‘s degree in liberal arts (i. e. grammar, logic, rhetoric, arithmetics, geometry, astronomy and music). It is unknown where he later became Master and where he acquired strong knowledge of medicine. In 1512, he requested the college of the University of Padua to grant him permission to take examinations for the degree of Doctor of Medicine, free of charge. Skaryna passed them with excellence, without having attended the lectures, and obtained the desired degree. Afterwards he would often mention this title with pride in his editions.

In 1517–1519 in Prague Skaryna published 23 Cyrillic books of Old Testament that would constitute his Ruthenian Bible (Бивлия Руска). The Czech Bible published in 1506 in Venice was used as the principal source in the preparation of the Cyrillic text for publication. A substantial part of the print run of the six books printed in 1517–1518 was financed by the Vilnius merchant, city councillor and mayor Bagdonas Onkovas (Богдан Онков, mentioned in sources in 1508, 1510, 1514, 1527), who had moved to the capital from Smolensk (in 1508 he had still been councillor in that city).

About 1520, Skaryna moved to Vilnius, where he founded the first printing house in the Grand Duchy of Lithuania at the house of the senior city mayor, Jokūbas Babičius (Якуб Бабич, mentioned in 1519, 1521, 1522, 1527; city councillor, 1525). About 1522, he published the Little Traveller‘s Book (Малая подорожная книжка), which consisted of the Psalter with supplementing liturgical texts (22 parts of these book are considered to be separate publications), and in 1525, the Acts and Epistles of the Apostles (the Apostle), i.e. a part of the New Testament. At that time Skaryna served as personal physician and secretary of the Catholic Bishop of Vilnius, John of the Lithuanian Dukes (1523-1535).

Sometime after 1525, Skaryna married Margarita, the widow of a Vilnius city councillor and mayor, Jurgis Odvernikas (Георгий Одверник, mentioned in 1521 and 1523); she owned real estate in Vilnius. Having married Francysk, Margarita became financially involved in the trade activities of his brother Ivan. She died after 1530.

In early 1530, Francysk, for merely a few months, entered into the service of the Duke of Prussia, Albert of Branderburg in Königsberg (the present Kaliningrad), but afterwards returned to Vilnius on personal business. The Duke would later write to the Vilnius Voivode and Grand Chancellor of Lithuania, Albertas Goštautas, that Skaryna had secretly took away two his subordinates – a Jewish physician and a printer – whom the Duke asked to return to Prussia.

Back in Vilnius, Francysk again went into the service of the John of the Lithuanian Dukes. In 1532, the Jewish creditors of Ivan Skaryna (†1529), Moses and Lazarus of Warsaw and Jacob of Poznan, lodged a complaint to King Sigismund the Old about Francysk Skaryna being liable for the debt of his late brother, but refusing to pay and hiding. Soon after that Skaryna was arrested and imprisoned in Poznan for several months. Ivan‘s son and heir, Roman, came from Gdansk to argue that Skaryna was not responsible for his brother‘s debts. In the same year, King Sigismund the Old confirmed the acquittal in his charter.

In 1535, Skaryna returned to Prague, where he became the gardener of Ferdinand I, the King of Bohemia and Hungary. Accused of negligent work, Francysk, in 1539, sought an audience with the King, who acquitted him, yet commanded the court to dismiss him from the service.

The exact date of Skaryna‘s death is unknown. His younger son, Francysk, died in Prague in the fire of 1541. The elder son, Simeon, in early 1552, applied for assistance to Ferdinand I Habsburg, who in his letter of 29 I 1552 wrote about the death of “his gardener” and commanded all his subjects to help Simeon to regain his father‘s inheritance. Simeon remained in Bohemia, where he became a physician and gardener, much like his father. He was still alive in 1584. The last mention of Skaryna‘s relatives in Polotsk (his two married nieces, the daughters of his brother Ivan) dates back to as late as 1605. Their descendants are traced by genealogists to these days. 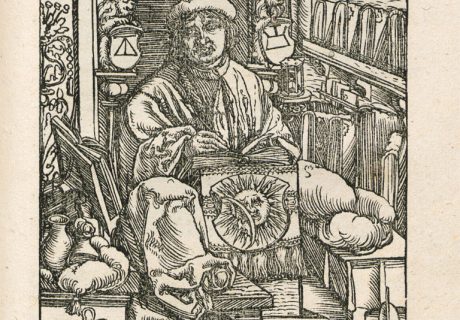